In April 2020, NSWP launched a global survey to understand the impact of COVID-19 on sex workers. To date, the survey has received 156 responses from 55 different countries. 18 of these responses were from 11 countries – Australia, Bangladesh, China, Hong Kong, Myanmar, Nepal, New Zealand, Singapore, South Korea, Thailand and Vietnam – in the Asia-Pacific region.

As sex workers and their clients self-isolate, sex workers are left unprotected, increasingly vulnerable and unable to provide for themselves and their families. The criminalisation of various aspects of sex work in most Asia-Pacific countries further magnifies the already precarious situation of sex workers in the informal economy.

“I’m unable to do my job at all because social distancing and the self-isolation laws mean I’ll get fined.” – Sex worker, Australia

Government responses to the COVID-19 pandemic

Governments across the region have closed brothels, bars, and massage parlors, and, in some countries, have introduced further repressive measures aimed directly at sex workers. A survey respondent from Australia reported crackdowns in areas known for street-based sex work, and four respondents from Australia and Bangladesh reported an increased monitoring of independent sex work. Two survey responses, both from Australia, reported increased raids, arrests and prosecutions.

Responses to the survey showed that many social protection and economic support schemes schemes – such as income support, emergency funds, food packs, and rent or mortgage relief – are in place for members of the general population but not always for sex workers.

“Workers who are migrant are not included in these measures.” – Sex worker, Australia

“The emergency food is very, very limited...only 1% poor people can get it. Corruption in distribution is a big challenge.” – HARC, Bangladesh

In addition to a global economic crisis, access to healthcare has also been severely affected and sex workers in Asia-Pacific are facing the impact in the following ways :

It is clear from the survey responses that sex workers across the region are excluded from government support packages and are facing the additional threat of reduced access to essential health services.

As can be seen around the world, the sex worker community in Asia and the Pacific is rallying to support one another.

Responses from Australia, Thailand and Vietnam recorded that the local sex worker community has established emergency funds. However, a common theme among these responses was that the emergency funding is unsustainable, as there is not enough to go around and the money is allocated very quickly. 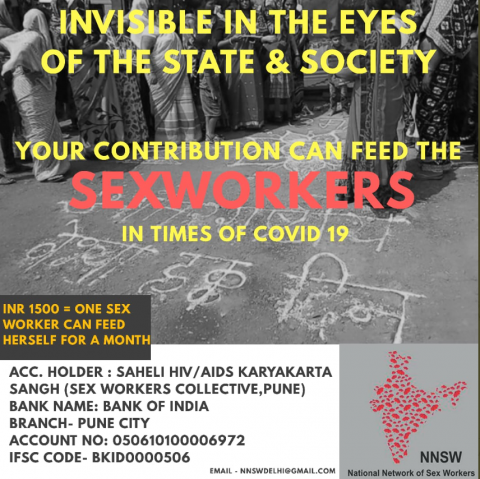 Responses from Australia, Bangladesh, Thailand and Vietnam reported that the local sex worker community had set up emergency food supplies.

The sex worker community has been relying on digital spaces for providing support, emergency services and for training each other on moving their work to online spaces. When asked specifically about virtual support, 3/10 responses provided further details on other ways in which sex workers were using the virtual environment to cope in the current crisis.

“We are offering phone, web, and limited outreach support to sex workers who contact us.” – Sex worker organisation, Australia

Most survey responses agreed that there was a clear difference between the sex worker community’s response and government advice, emphasising the community’s commitment to ‘flattening the curve’ but also calling out governments that do not provide for sex workers amid the crisis, leaving them stuck between surviving and following social distancing.

You can see a collated list of sex worker community responses from around the world here.

What else is needed to help protect sex workers during the COVID-19 pandemic?