This 17th December, sex workers around the world are marking the nineteenth International Day to End Violence Against Sex Workers. The day is used to highlight the need for action to end violence against sex workers. The issues faced by sex workers often vary from region to region, due to different laws, social and cultural contexts, but one common issue faced by all sex workers is their vulnerability to and experience of violence. COVID-19 has further exacerbated this issue and sex workers around the world have reported greater levels of violence as they struggle to make a living during the pandemic.

Sex workers are vulnerable to violence because of the criminalisation and legal oppression of sex work, compounded by stigma and discrimination. This vulnerability to violence is increased for sex workers living with HIV, sex workers who use drugs, transgender sex workers, migrant sex workers, and sex workers that are part of other marginalised groups.

This International Day to End Violence Against Sex Workers, NSWP have launched the Sex Workers Speak Out video wall project. Starting with 17 videos, the project will eventually have 100 videos of sex workers speaking out sex work and decent work; and sex work, sexual and reproductive health & rights (SRHR) and bodily autonomy.

Around the world, sex workers are marking 17th December with online events, in-person memorials, and collective actions to demand decriminalisation.

The African Sex Workers Alliance (ASWA) are marking the day with the theme of ‘Report it!’, encouraging sex workers to report incidents of violence using their Sex Workers Murder Monitoring Tool. They also put together a blog post explaining more about the Tool, which can be read on the ASWA website. 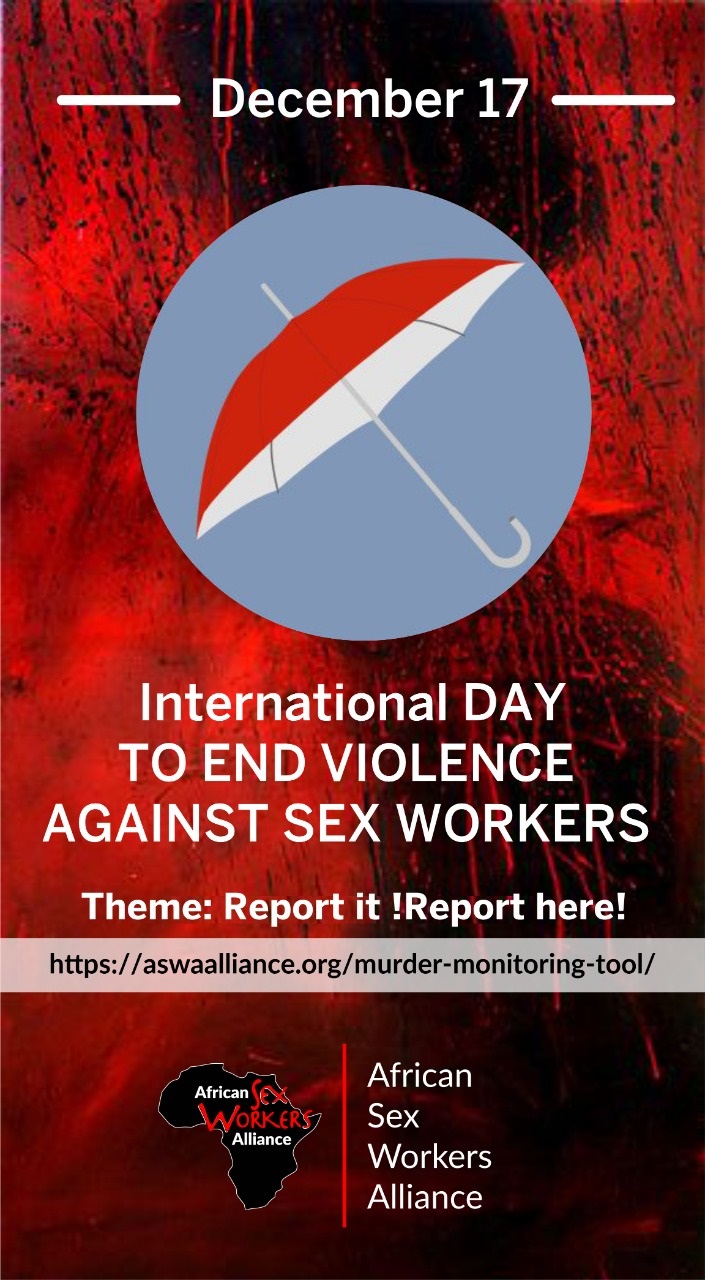 Zi Teng, a sex worker-led organisation in Hong Kong, released a statement on the 19th International Day to End Violence Against Sex Workers, outlining the ongoing impacts of COVID-19 on sex workers and the rising cases of violence due to the current working conditions. We have included an extract below but you can read the full statement on the Zi Teng website.

“On the International Day to End Violence Against Sex Workers, we would like to urge all sex workers to be aware of your rights. It is necessary to understand the latest situation of the sex industry, and learn to protect yourself. Even though you are working in the industry for short period, you still need to understand the basic rights. You should not think that you can handle all the situations alone. On the other hand, we would like to ask the public to help sex workers when the latter is in trouble. Please do not turn a blind eye to sex workers. The law enforcing groups in particular, should respond seriously to sex workers’ calls for help. The frontline police officers should not behave in ways that may discourage sex workers from calling the police, or sex workers will always become the targets of villains and face more dangers."

In Bangladesh, The HIV/AIDS Research and Welfare Centre (HARC) hosted an event where over 100 sex workers gathered. Of the event, a representative from HARC said: "APNSW and 3 members of the Bangladesh parliament gave their notes for the sex workers. Many journalists came to the event. It was a great event and we achieved commitments from parliament members to end violence against sex workers in Bangladesh. Please see an article from one newspaper; https://www.newagebd.net/article/157530/sex-workers-in-bangladesh-are-honoring-the-international-day-to-end-violence-against-sex-workers."

They have launched a video with Migrant Sex Workers voices regarding COVID-19, their demands for rights and the improvement of their working conditions. By choosing this date and the video format, TAMPEP expect to ensure the voices of Migrant Sex Workers are heard and included in the days discourse.  To accompany the video a booklet presents the full testimonies of the eleven migrant sex workers who gave their statements.

The Sex Workers Alliance Ireland (SWAI) will be holding a candlelit vigil outside of the Dáil (Ireland's national parliament) at 6:30pm to mark IDEVASW. SWAI report that “for the second year in a row Ireland languishes in the Tier 2 Watchlist of the Trafficking in Persons report. Despite the promises of client criminalisation fewer trafficking victims have been identified and violence against sex workers has increased by 92%. Stigma against sex workers rages on and affects the health, safety and security of sex workers in Ireland. We will have a moment's silence for those who have suffered violence and lost their lives due to this abhorrent stigma.” More information can be found on their Facebook event page.

In Lyon, sex workers are gathering at 18:00 at the Place de la Comedie to mark the day. 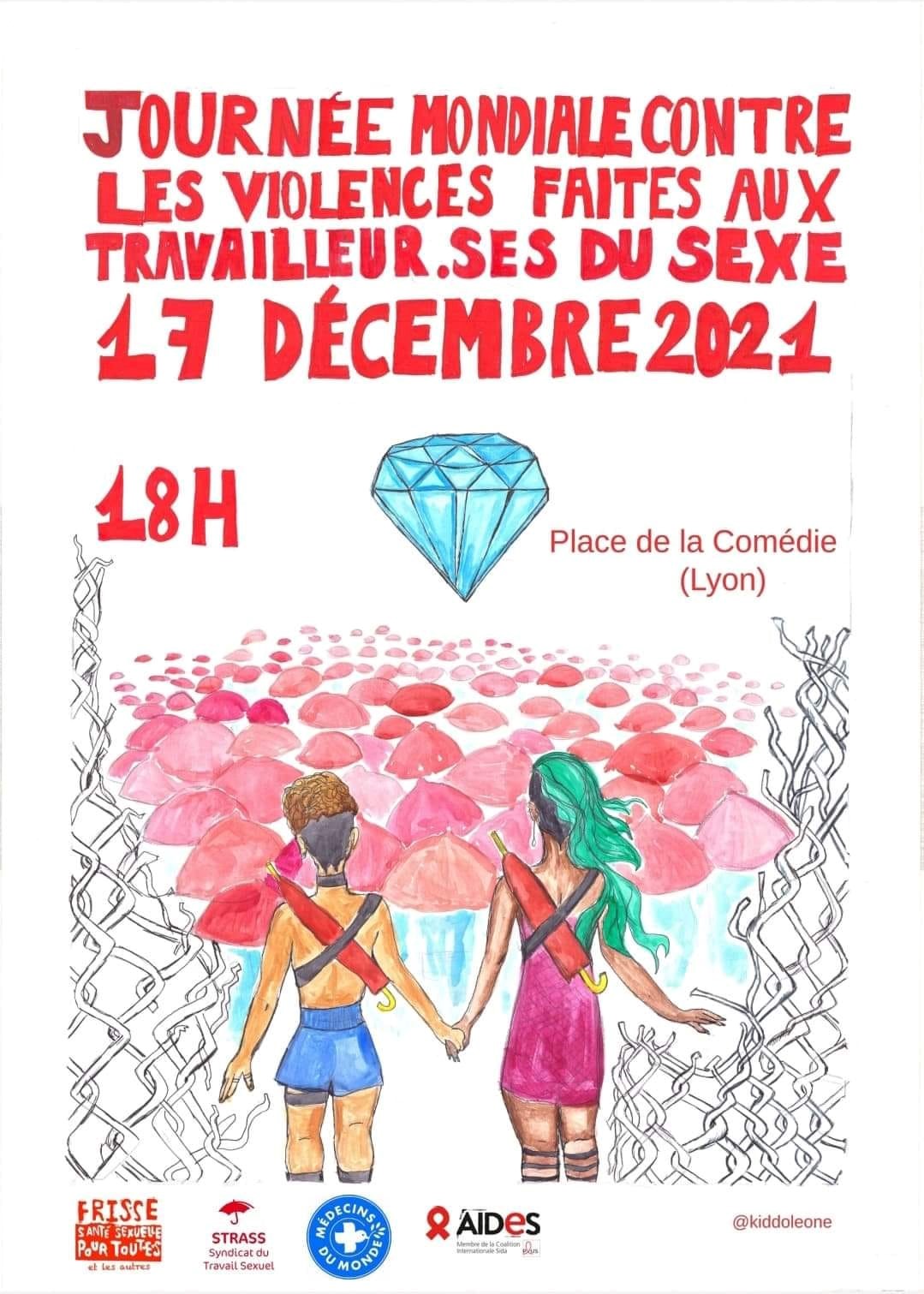 The English Collective of Prostitutes with Sex Worker Advocacy and Resistance Movement and the All African Women’s Group is this year organising a demonstration to commemorate Agnes Wanjiru, a Kenyan sex worker killed by a British soldier. The Justice for Agnes Wanjiru demonstration will take place at 12pm on Friday 17th December 2021, in Whitehall Gardens, Victoria Embankment. 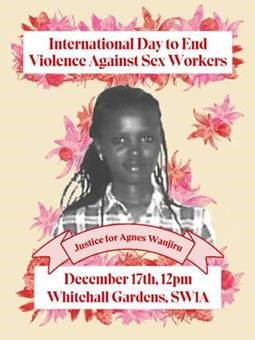 The Russian Forum of Sex Workers are doing several different activities to mark the day. Forum member, former sex worker, and artist from Krasnodar, Marusya Morkovkina, together with the Forum, will hold an exhibition of her paintings that will tell viewers about her experience in sex work. The opening of the exhibition is scheduled for December 14 in Moscow in a private gallery "This is not here". The paintings will be exhibited in the gallery windows that overlook one of the streets of old Moscow, a place often visited by residents and guests of the city, everyone who passes by will be able to see them. The exhibition will last 7 days, from 14 to 20 December. Find out more here.

As well as the exhibition, Forum participants are conducting an online flash mob with the tag  #TruthInTheMirror. The essence of the action is that the participants of the flash mob write on the mirrors a special text against violence against sex workers. This text was invented by the sex workers themselves, but the participants of the flash mob can write any other text against violence they wish. The mirror with the text is photographed and later a collage is made from the photo, and based on these photos the Forum plan to create a video clip for their YouTube channel.

STAR – the First Sex Workers Collective in the Balkans, in coalition with HOPS – Healthy options project Skopje and Coalition MARGINS, is organising its 14th traditional Red Umbrella March on 17th December. The march will take a place in the centre of Skopje at 12:00PM.

Within this year’s campaign they will once again emphasise the urgent need for decriminalisation of sex work as the best policy for promoting health and human rights of sex workers, their families, and communities in the Republic of North Macedonia. They expect numerous supporters and activists to join the Red Umbrella March and media sources to cover the public event. More information can be found on their Facebook page and in their announcement for this year’s Red Umbrella March.

Plataforma Latinoamericana de Personas que ejercen el Trabajo Sexual (PLAPERTS) are organising several events in Ecuador to mark December 17th. These include a community mobilisation event where they will discuss the history of sex work, and give speeches to the media ahead of December 17th. They will also take part in the walk of the umbrellas, where authorities and the media will be invited and there will be an exhibition so that they can talk about Public Policies to their sector.

Associacao Pernambucana das Profissionais do Sexo (Pernambuco Association of Sex Workers), Brazil, will host a live talk about the regulation of sex work in commemoration of the day to combat violence against sex workers.

Fundacion Angelica Quinta, El Salvador, are planning a discussion to increase the visibility of the day.

“This week the Toronto Homeless Memorial added 30 names to the monthly vigil, more names than ever before and a sharp increase from previous months. The sheer amount of loss we've experienced through the pandemic has devastated our community.

On December 17th we gather for the International Day to End Violence Against Sex Workers to commemorate the lives of local sex workers we've loved and lost. The date has become a globally recognized space to commemorate the lives of sex workers lost to violence, abuse and criminalization. Before and through the pandemic, the criminalization of our work as well as targeted violence against queer and trans, Black and Indigenous sex workers of colour has been swift and deadly.”

You can find out more on the Maggie’s website.

SWOP Behind Bars, USA, released a statement about their marking of the day and the 2021 International Day To End Violence Against Sex Workers Memorial List, compiled by COYOTERI. An excerpt can be read below but you can read the full statement on their website.

International Day to End Violence Against Sex Workers was first recognized in 2003 as a vigil for the victims of the Green River Killer in Seattle, Washington. Since 2003 December 17th has empowered people from cities around the world to organize.

During the week of December 17th, sex worker communities and social justice organizations stage actions and vigils and work to raise awareness about violence that is commonly committed against sex workers. The assault, battery, rape and murder of sex workers must end. Racism, economic inequality, systems of colonialism, state violence and oppression must end. The stigma, discrimination and criminalization that makes violence against us acceptable must end. Please join with sex workers around the world to stand against criminalization and violence committed against us.”

COYOTERI, USA, with guest SWOP Behind Bars are hosting a virtual memorial on December 17th from 7 PM - 10 PM Eastern Standard Time live from the United States. No registration is required, simply join them @ https://tinyurl.com/bsdufym6.