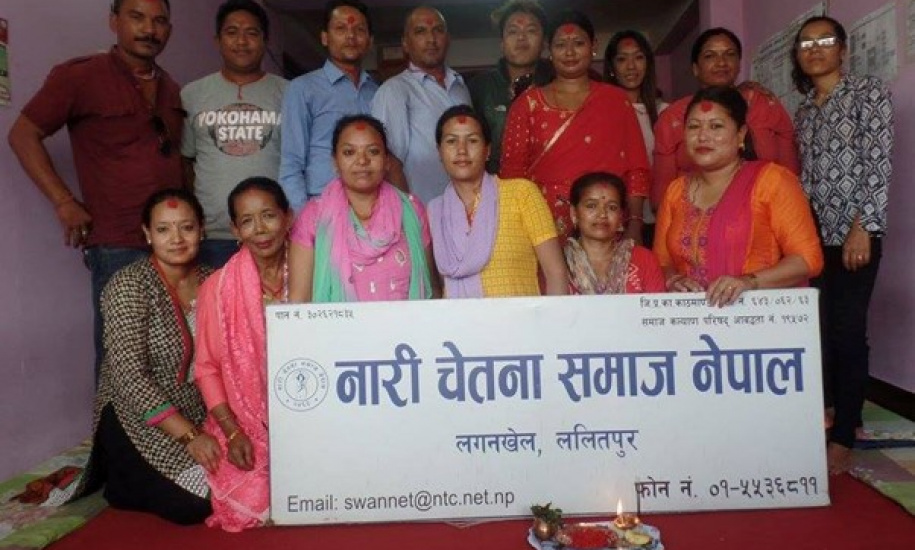 By women, for women;
Enormous effort has been put into empowering Nepali women at risk by providing health care and education services and through various trainings.  However, the quality of life of these women remains the same and the rate of HIV infection and health and economic problems are still increasing at an alarming rate. In addition to this, women who are involved with sex work or vulnerable to sexual and economic exploitation in Nepal have not been involved at the decision-making level regarding programs and policies which directly affect them. Most program designers and decision makers have no true understanding of the real issues that women subject to sexual exploitation face in the Nepali context. Instead national and international organisations working with women at risk have simply utilised female sex workers at the grassroots level as community mobilisers and outreach workers. Therefore, women who were involved in sex work or were at risk of sexual and economic exploitation – in order to promote the real issues of these women from the policy level to ground level – formed the Society for Women Awareness Nepal (SWAN), (Nari Chetana Samaj) (NCS).

Society for Women Awareness Nepal (SWAN) is Nepal’s major and first female sex worker-led non-governmental organisation (NGO) operating in Nepal for more than 16 years (registered in 2006) to support and empower women who are involved in sex work or vulnerable to economic or sexual exploitation. SWAN aims to create awareness about the situation of these women by providing them with education and information on HIV, SRHR, their rights, economic empowerment, and the care and support they so desperately need. SWAN also works with national policy makers to ensure that women’s voices are heard at the decision-making level.

We believe that as members of SWAN we should not remain silent on the issues that directly affect us such as HIV, Gender Based Violence and access to our basic human rights. Since its establishment, SWAN has been providing strong leadership, strengthening its role amongst women who are involved in sex work or at risk of economic and sexual exploitation, advocating for the basic rights of these women, speaking out against violence upon women, developing leadership skills amongst the women, offering education on reducing the risk of HIV and providing alternative livelihood services and options. We also provide care and support programs for the children of women at risk.

Sex work is restricted and criminalised in all states despite it being widespread in Nepal. Originally the sex workers were locals, but there has been an influx of foreign sex workers over the last 10 years. 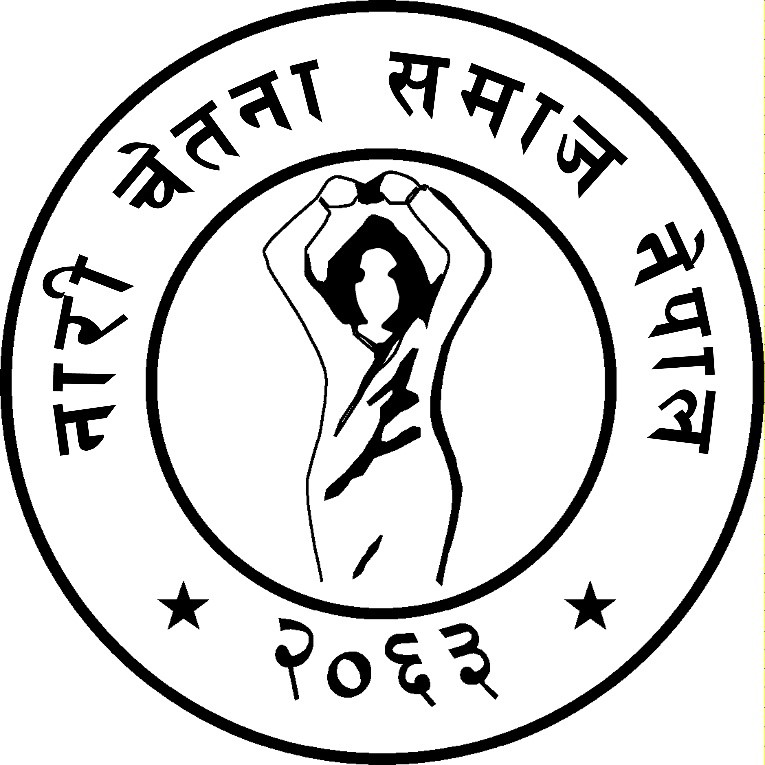 SWAN believes the right to work and advocate for sex workers, and runs programs that empower sex workers to have a better living.

SWAN focuses on the following areas:

o   Human rights of sex workers: There are no federal laws against sex workers but there are laws against related activities. Sex workers can be punished when caught negotiating sex ‘aggressively’ with a client. Sex workers are harassed and punished by law enforcement agencies that apply administrative offences. Various other laws such as those against vagrancy are also used against sex workers. Law enforcement focused on closing brothels has shifted the sex industry to entertainment venues and hotels and public soliciting is now gradually being replaced by internet and mobile phones. According to sex workers the law enforced by ill disciplined, underpaid civil police and overzealous religious police so that violence and abuse is common especially against drug users, migrants, transgender people and sex workers.

o   Advocacy: SWAN oppose the criminalisation and other legal oppression of sex work, we also critique the trafficking paradigm that conflates representations of sex work, migration, and mobility of sex workers. We advocate for universal access to health services, including primary health care, HIV and sexual and reproductive health services. Our biggest challenge is the stigma and discrimination against sex workers, their families and partners, and others involved in sex work not only that we also advocate them in economic empowerment and social inclusion of sex workers as sex workers. It is important in our field of activism that we are opening doors and engagement towards sex workers’ wellbeing. Recently we are working hand in hand among the sex worker organisations and allies’ organisations to address the challenges and to reform national network in Nepal. This initiative is a collaboration with Asia Pacific Network of Sex Workers (APNSW).

o   Health and Economic Empowerment: Globally it is recognised that prevention and treatment efforts among sex workers require not only a clinical approach, but interventions to address the vulnerabilities of sex workers on a structural level, including legal and physical.

In addition, alongside sex worker’s susceptibility to HIV and other sexually transmitted infections, sex workers face a number of barriers to good health. A major problem for sex workers is lack of access to quality health services, with barriers to utilisation including stigma, inconvenient hours of operation and contraception use is limited among sex workers, who frequently face rape and sexual harassment by clients. Because sex work is criminalised in Nepal, the sex industry has been driven underground. Given the socially stigmatised nature of their work, sex workers are left without recourse to legal protection from threats to their safety, vulnerable to arrest and abuse and without access to health and social services. SWAN works on the areas of condom distribution and HIV prevention, treatment, care and support services among key populations and people living with HIV under the USAID/PEPFAR supported EpiC Project. We look at this opportunity as the perfect one for us to get up close with the sex worker community.

Yes, SWAN provides health related services to SWs. SWAN have our own clinic to provide HIV, STI, Family planning services at Kathmandu valley and provides support to SWs for Violence and other legal related service with other service providers.

No, SWAN will not do the political work and will not participate any political related campaigns.

Sex workers are involved in our organisation through our outreach on a grassroots level such as going to the "hotspots" like brothels, massage parlours, cabins, and streets whereby our outreach workers build the rapport. Community sex workers are also involved with Drop-In Centre In-House Session, with cosmetics made available to them, and a place to rest and have a peaceful sleep. SWAN also do the different Focus Group Discussions and trainings to create new leaders and new members from SWs in community. To date SWAN, through its outreach workers and case workers, has reached more than 9,000 sex workers to ensure that their health and wellbeing is taken care of physically and emotionally. We exist to serve the sex worker community with legal support systems and also we will doing coordination with other organisations for shelter to them when they are in need or taking a big leap in their life to move on from sex work.

All female sex workers can be members of SWAN and only these members have rights to vote for the board of the organisation. In addition, SWAN gives priority to sex workers for working in SWAN and currently there is more than 75 % staff from the sex worker community.

Criminalisation of sex work still remains as a major challenge for sex workers in Nepal. Criminalisation drives sex workers underground and brings a lot of stigma, discrimination and violence to SWs. As long as there is not more support from the women’s movement in Nepal that will remain our biggest challenge.

As we are growing each day, there are a few things that may help us in overcoming our daily struggles. Financial support has been the main obstacle. Among the necessities that would help us are: 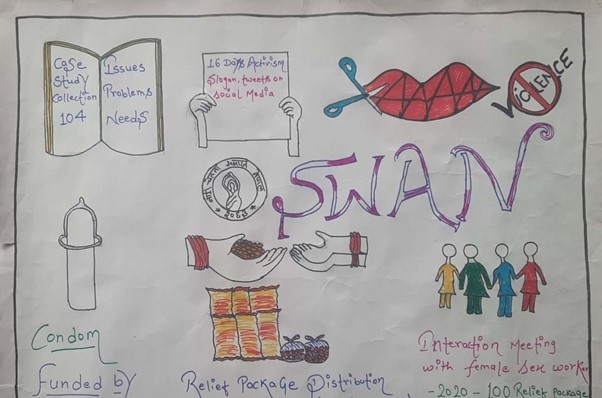