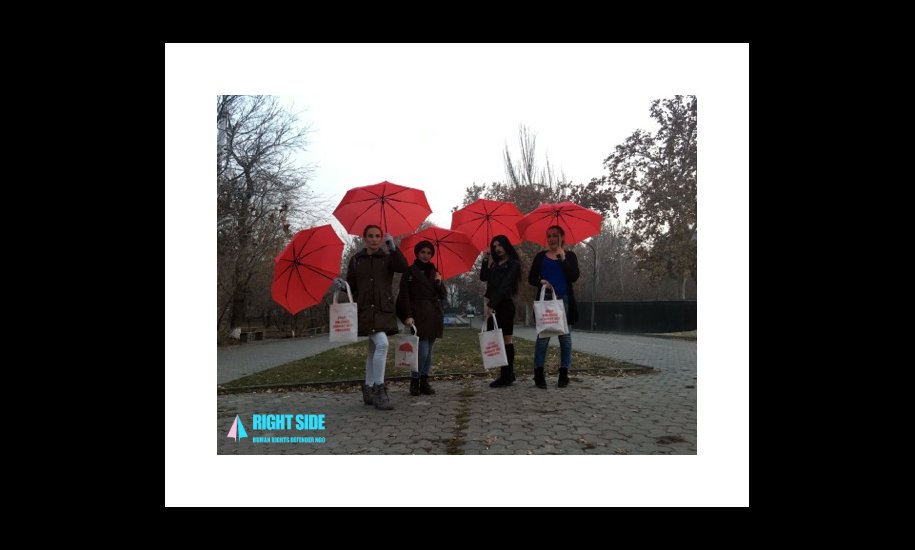 Right Side Human Rights Defender NGO is the first and leading community-based human rights defender NGO which is run by and for trans people and sex workers in Armenia.

Tell us about your organisation:

“Right Side” NGO carries out its activities based on its bylaws, according to the local legislation of the Republic of Armenia. The organisation has established cooperative relations with diplomatic missions, UN agencies, CoE, other intergovernmental, non-governmental, international, local organisations and networks.

The “Right Side” NGO was registered in the Agency for State Register of Legal Entities of the Ministry of Justice of the Republic of Armenia as a human rights defender NGO on January 25, 2016. It was formed to create lasting solutions for promoting the quality of dignified lives of transgender people and sex workers to prevent violations of human rights and to overcome difficulties. We are striving to live in a harmonious society which promotes the inclusion of trans people and sex workers in Armenia.

“Right Side” NGO works in all the regions of the Republic of Armenia.

The Republic of Armenia is a conservative, patriarchal, cis-heteronormative country with many political, social, economic and even physical and psychological dangers for sex workers to come out, be visible, express themselves or fight for their rights. Over the last 2 years, sex workers have become more visible and active due to “Right Side” Human Right Defender NGO's public activities. Nevertheless, the state and society never cease to discriminate against them with threats of ostracisation, harassment, physical and psychological violence, hate speech and hate crimes. They often face hatred and discrimination because they are the groups who are under the greatest risk to live with or be affected by HIV and they lack proper knowledge and skills to fight for their rights, and a safe and secure lifestyle. With high rates of whorephobia, society remains largely exclusive and violent towards sex workers. The local media, and even some civil society groups, also seek to promote whorephobia.

The most vulnerable people in the sex workers' community in Armenia are transgender sex workers, men who have sex with men (MSM), and sex workers who use drugs as they all face gross human rights violations, discrimination and hate crimes. When reported, these violations are not taken seriously. Moreover, these people are further mocked, discriminated and harassed at the police stations by the whorephobic, homophobic and transphobic officers who take the side of those perpetuating the crimes. These are the reasons why a lot of sex workers are reluctant to report the hate crimes they face, and by avoiding further harassment and stigma, they become more self-isolated. As a result, there is no official data to get even an approximate understanding regarding hate crimes and instances of stigma and discrimination committed against them. We know about the instances of discrimination and human rights violations only because we talk and belong to the community ourselves.

Furthermore, transgender sex workers, MSM and sex workers who use drugs are stigmatised by many police officers, health care providers and the media as being “spreaders” of HIV – discouraging them from seeking sexual and reproductive health information and services. This further discourages people from accessing essential information, voluntary HIV/STI testing and other sexual and reproductive health services. MSM and transgender sex workers experience multiple forms of intersecting discrimination because of their sexual orientation and gender identity, and involvement in sex work. Those not conforming to established gender or sexuality norms are often ostracised from their communities and families, creating additional barriers to employment, housing and health care. 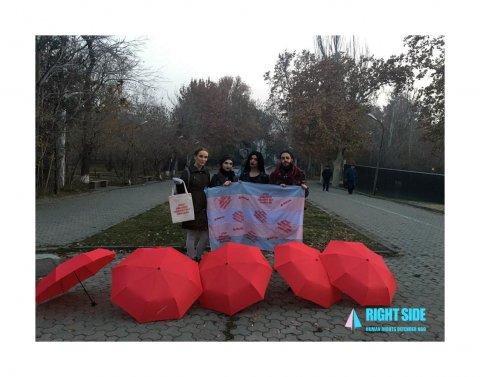 “Right Side” NGO provides the following services to sex workers:

“Right Side” NGO is engaged in advocacy and campaigning in the following way:

"Right Side” NGO accepts sex work as work and spares no effort to make sex work safer. Large-scale projects have been launched by the organisation for sex workers. In total, about 133 people completed tailoring and make-up courses. Right Side has also trained 62 sex workers about human rights, safety and security. The organisation has mobilised them through outreach work and peer education, going on to include sex workers' issues on its political agenda. In addition, the organisation has documented cases of violence against sex workers, represented their interests in state bodies and started to implement sex worker-targeted projects with SWAN, NSWP and RCF.

Alongside this, 85% of the NGO's workers and 75% of the board members are sex workers. The NGO decisions are made by taking into account the recommendations and suggestions of the sex worker community and sex worker volunteers of the NGO are actively involved in all our projects.

Because of COVID-19 restrictions and war on the frontline of Armenia-Artsakh-Azerbaijan, we have not been able to organise big campaigns recently, but we have organised 3 camps with the participation of trans sex workers during 2020 in spite of all the challenges in the country.

The Human Rights Tulip 2020 was awarded to Lilit Martirosyan, the Founder and President of the Right Side Human Rights Defender NGO, on the 10th of December 2020. Minister of Foreign Affairs of the Netherlands Stef Blok presented the prize during an online ceremony organised by the Government of the Netherlands on Human Rights Day. Because of the political tensions and social situation in the country, a number of media representatives have covered the award and criticised Lilit for taking the money, saying that this award (EUR 100,000) should have been transferred to the people affected by the Artsakh war. As a consequence, there has been lots of hate speech against Lilit and the trans community. The NGO has done everything in order not to promote tensions by ensuring the safety of the community during these days.

As trans community members are released from serving in the army, they are free not to go to fight. Armenian patriarchal society cannot understand why transgender people are unable to serve. They spread hate speech on social media by claiming that transgender people should go to the army and die instead of the "normal" and "worthy" boys. Our community lives in fear now because they are afraid to go outside and appear in public, as they are targeted more than before. The resentment of the transphobic society is more aggravated, and our responsibility to ensure the safety and well-being of our community has increased.

Moreover, trans sex workers face social hardships because they are nearly unable to work under the conditions of COVID-19 which is risky for their health. Today, legal cases have increased and our lawyer works on a 24/7 basis to ensure the safety and security of the community.

We as a community-based organisation are contributing all our resources to making the lives in our community better, and all the challenges we face, we overcome with the unity of our workers, volunteers and community members.

Our message is; “We dare to build prosperous and secure futures for trans people and sex workers in Armenia” and we call for the sex workers’ movements around the world to dare to be united and speak up for our rights.

We call on the people outside of the movement to respect our labour rights and our right to dignified lives.