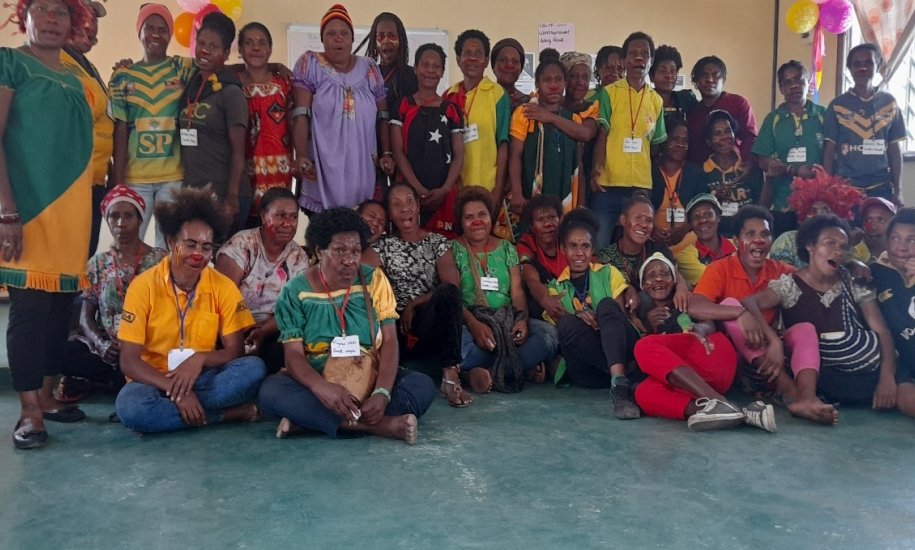 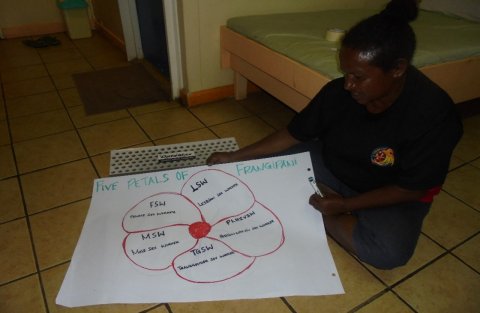 Friends Frangipani’s vision as represented by the five petals of the frangipani flower.

Let us join hands together, to be a foundation and guiding light for the human rights of all Sex Workers. Friends Frangipani believes in sex workers doing it for ourselves.  We think it is essential that our experiences, voices, opinions, beliefs and knowledge inform any legislation, laws, service design and delivery and resources that target sex workers.  There is so much violence, stigma and discrimination against Sex Workers in Papua New Guinea.  We believe in “OUR BODY, OUR BUSINESS” and think sex workers should have the same rights as everyone else.

Friends Frangipani Association aims to establish a foundation to stand together for the rights of Sex Workers and act as a guide for new, existing and past Sex Workers.  We will work to reach those who have yet to come out, and will spread throughout the provinces of PNG; establishing provincial offices and reaching out to those Sex Workers who need us most, especially those not yet confident to come out.

We have developed strong relationships with Sex Worker communities and work to ensure that services are friendlier to FSW, MSW, PLHIVSW, T/GSW and LBSW.  We will use our office as a vehicle to represent all Sex Worker communities everywhere, to push for human rights, to improve quality and opportunities in life.

Friends Frangipani was originally formed by sex workers in 2006 when the sex workers had their first National Elections for Board Members in Goroka, Eastern Highlands Provinces and drafted their first Constitution.  It was actually negotiated in 2004 after some young sex workers were raided by Police when they did their sex work in a guest House called “Noko” based here in Port Moresby, National Capital District, Papua New Guinea.  The organisation was supported by AusAID from 2005 up till 2015 and partnered with Scarlet Alliances, Australia.

We work regionally in Papua New Guinea. Friends Frangipani Inc. is also a member of APNSW; NSWP; APCASO and a PAC Member for Red Umbrella Fund.  FF works with 1,200 sex workers and has meaningfully reached out to 15 Provinces in the four regions (Highlands, MOMASE, New Irelands and the Southern Region) of the country itself.

Sex workers continue to face multiple challenges, including social, violence and poor health.  These overlapping and mutually reinforcing factors have been shown to restrict sex workers’ ability to improve their living and working conditions.  The biggest challenge for sex workers is to become united and fight for their rights.  Violation of human rights, violence, stigma and discrimination is very common among sex workers.  Also, sex workers are not meaningfully involved with sex worker activities in Papua New Guinea.  To consider all these challenges, Friends Frangipani would like to change the following issues:

As the legal situation is seriously poor and tough for sex workers and violence is very common, FF will develop a comprehensive program in Port Moresby first to end/reduce violence against sex workers.  This program will include paralegal support, involvement of the FSVU and continuous sensitisation meetings with the law enforcers.

Friends Frangipani Inc has a key role and does campaigns and advocacy within policy, law and program development forums and advocating at the local, national and international level.  Friends Frangipani works closely with all the partners, especially the Police and uniform personnel, to reduce violence against sex workers by doing cleanerthons to sensitise the Police officers and providing key messages about the sex workers rights. 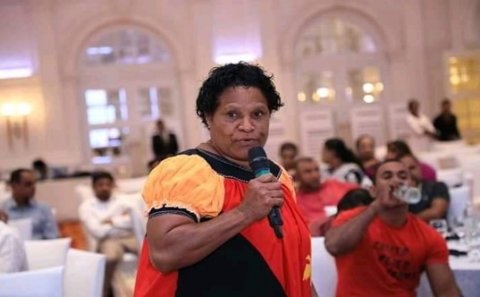 Our Executive Committee and membership is made up of FSW, MSW, T/TSW, PHLIVSW and LBSW and our activities are always guided by them including the Aims and Objectives of Friends Frangipani.  Our work will be done by, with and for PNG sex works.  “In joining hands and working together we will be strengthened.”

In March 2015, Friends Frangipani’s advocacy resulted in the decriminalisation of sex work across Papua New Guinea. Application went through the floor of Parliament for discussion in 2017 but declined by the Prime Minister after debates were done.

The greatest challenge that we have faced was that we have never secured any data and that was to prove for the reasons why we wanted to decriminalise sex work in PNG and the NEC was also not advised.

Additionally, in June 2012, FF witnessed the result of its advocacy work with IDLO-PNG; when four female sex workers of FF successfully won a court case that was led by Ms. Cathy Ketepa who is now the Coordinator for FF; they won, for the first time ever, a court case against defamation of character with a payment of 4,000 kinas from a married woman.

Sex Workers in Papua New Guinea have experienced the impact of HIV both individually and as a sub-population, in terms of health impacts, but of more concern, in the area of stigma and discrimination.  The biggest impacts of this stigma and discrimination are that sex workers are less likely to access the service, are less likely to seek justice and are less able to participate in family and community life.  Sex workers are often rejected by family and friends, and for transgender and HIV positive sex workers the stigma can be more intense.  Sex workers report health and social issues including exposure to violence and family breakdown, homelessness and illness or death, particularly amongst younger people.

Stigma and discrimination have a big impact on sex workers’ lives and can destroy efforts made toward HIV prevention and care.  Sex workers may internalise stigma and isolate themselves, or see themselves as undeserving of access to health and justice.  In addition to stigma and discrimination, sex workers continue to experience violence, including from police, yet also experience a lack of access to justice and human rights.

Research conducted with sex workers in Port Moresby in 2010 by the Institute of Medial Research (IMR) shows that sex workers are implementing safe sex practices more successfully than other members of the population, yet they have significantly high rates of HIV/STIs, compared with other groups in the community.  The research reported the unadjusted HIV prevalence was overall 17,6%, 19% amongst women, 8.8% among men and 23.7% among transgender sex workers.  The country’s prevalence has been reported as 0.9% and 2.5% in recent times.  The research has confirmed what sex workers have been saying for many years; that the laws; violence (including violence from police) and stigma and discrimination are creating barriers to HIV prevention and access to services for sex workers.

The following issues have been raised by sex workers in PNG:

Does the organisation have a message for the sex worker rights movement?

Friends Frangipani say: “TOGETHER WE STAND, UNITED WE FALL!!”